The Name Game by Ali Harris 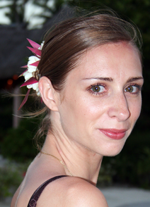 Being eight months pregnant with my second child I’m currently name-obsessed. You’d think it’d be easier second time round but, once again, I find myself putting aside my much loved chick-lit bedtime reads for an altogether weightier tome. No, not War and Peace (been there, tried it, gave up) but a nifty little non-fiction number entitled 40,0001 Baby Names (Yes, apparently there ARE that many. And yes, most of them ARE bonkers).I spend my evenings scouring the pages of this epic beast of a book, writing endless lists of flowery forenames which then get rejected by my husband who gives myriad reasons our child will be beaten up in the playground if I lumber them with a name that would sound odd anywhere other than LA, or the Jamie Oliver household. (Petal Blossom Rainbow, or, um, Buddy Bear anyone?)But my bump isn’t the only second baby I’m struggling to name. I’m also starting my second novel and I feel fraught with the pressure of giving these fictional people namesthey’ll have for the rest of their (shelf) lives.

Just like my unborn child I’m worried my chosen name won’t suit them, that other people will hate it, or that it’s way too common. Because names brand you, don’t they? They’re part of your identity and give you a personality before you have a chance to develop your own.I first experienced serious name panic when I was writing my first novel Miracle on Regent Street. One of my romantic heroes spent the entire duration of the book being called Nate. A sexy, strong leading man kind of a name, I thought. Turns out so do lots of other authors, as my editor kindly pointed out when she read the first draft. Luckily we quickly happened upon his new name ‘Joel’ and it instantly fitted him like a bespoke suit. Name crisis over.

Then there was Felix, the loveable old security guard. Now he was always a Felix to me. The name perfectly fitted his cheeky, sparkly-eyed personality, was timeless enough to fit a pensioner and instantly said ‘friendly, sweet and funny’. But then I watched Mannequin, a film I haven’t seen for about a million years and there was a horrible, nasty, control-freak security guard in it, also called Felix. So I changed my character’s name. But his new moniker never felt right. I battled on to the end of the first draft until I admitted he would always be Felix to me. So I changed it back, and hoped that nobody would make the Mannequin connection (Um, oops. Probably shouldn’t have mentioned it here, then).

With all that in mind, I’ve decided that this time, I need some help. I mean, coming up with names for a child and lots of characters whilst heavily pregnant and therefore highly hormonal is a dangerous business. So (drumroll please)I’m giving you the chance to name a female character in my next book The First Last Kiss. Yes you! She’ll be the best friend of my main female character, a little bit of a loose cannon who is always up for a laugh.

Books and the City are delighted to be able to offer YOU the chance to name a female character in Ali Harris’s next book The First Last Kiss.  The character is a bit of a loose cannon, always up for a laugh, and is the best friend of the main lead female character in the book.Just post your character name idea in the Comment box below.  Ali will be picking the winner herself, so don’t forget to log back on to see if you have won!

7 Comments to “The Name Game”