The Essence of a Romantic Meal by Milly Johnson

For me, there are few things more romantic than a partner cooking for you.  Food and sex have always been entwined and a partner who takes care to lovingly prepare a feast for you, well, you just suspect they’re going to be equally as good in the bedroom department. Mind you, the first romantic meal I ever made was garlic mushrooms, lasagne and then (cringe) Viennetta – although it did have fan-shaped wafers in it. Amazingly my boyfriend at the time was impressed, especially as it had taken me all day to write out the menu in italics. And if that teaches you one thing, let it be this: there are more elements to a romantic meal than just the food.  If you need further proof, well, this is being written by a recent winner of Come Dine With Me (surely you must know that – I’ve told everyone on the planet!). I was up against some serious chefs on that programme, and though my menu wasn’t as adventurous as some, combined with a ‘hearts and flowers’ theme, my overall package won the day. And here is why… 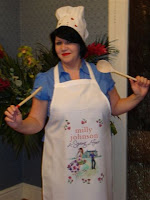 I didn’t go to town with oysters and monkey glands with a sprinkle of powdered rhino horn.  Personally, even the thought of eating a snotty oyster makes me retch – très romantic! I made heart-shaped potato scones, then on top placed a tower of black pudding (way to a Northern man’s heart) and a slice of goat’s cheese – all grilled until the cheese melted, served it with rocket leaves, pomegranate ‘rubies’ and a drizzle of balsamic vinegar and honey mix. My main course was basically chicken in a white wine, gruyere and oyster mushroom sauce, served with ‘sweetheart potatoes’ – a dish – ahem – that I created… Dauphinoise potatoes with a layer of sliced sweet potato in the middle, served in heart-shaped dishes, accompanied by tiny puff pastry hearts, baby sweetcorn, tenderstem broccoli and that king of aphrodisiac veg – the phallic asparagus spears. Dessert was layers of heart-shaped shortcake biscuits sandwiched with mascarpone cheese mixed with cream, raspberries, and a dribble of raspberry coulis with one little bright mint leaf as garnish.  The setting was a room filled with heavily scented roses, red linen, and glittery heart decorations everywhere.  It was a jolly evening because my guests felt special, relaxed, cared for. It warms a dining room by degrees when your efforts shine through.

The ‘sum’ of a successful romantic meal is not set in stone. Food lovingly prepared that somehow goes wrong + drop-dead-gorgeous date + special offer Cava, can be much greater than the sum of fabulous food + intelligent conversation with nice-enough date + Cristal champagne. Personally I think the effort behind the food is the key – the more a date sweats about wanting to make an impression, the more I’ll love him whatever he delivers to the table.A builder friend of mine was absolutely strapped for cash and not known for his culinary skills, but he was determined to feed his new girlfriend with some home-cooked grub. So he grabbed a bag of spuds and some mince from the supermarket shelves and made shepherds pie for the woman he fancied.  They’ve just celebrated their silver wedding.
I rest my case.