DO NOT FALL FOR IT! by Jane Costello 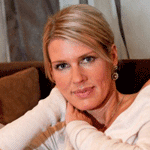 Well, single ladies, here is my plea to you: DO NOT FALL FOR IT

There is no doubt that being in love is the best thing in the world. Better than sliced bread, the Milk Tray Man and an unexpected tax rebate, all put together.

I know, because I am. In love with someone, that is. Now, before I lose you, let me say straight off that I am not smug about this fact. Happy, yes. Smug, no. Because, singletons, I’ve been there. I know exactly what it’s like at this time of year – and it isn’t always pretty.

I’ve been the woman who returns from work, aflutter with hope that some mystery hunk has sent a card . . . only to find a gas bill and invitation to sponsor a donkey in Peru. I’ve dreamt of lavish dinners a deux, but had to settle with something that takes three and a half minutes at 850 watts.

I’ve been there and I came back from the brink; gave myself two sharp slaps across the face (not literally) and reminded myself why being single can be, not just okay, but great. And a pesky little thing like Valentine’s Day isn’t going to alter that.

Never forget that the biggest thing going for periods of singledom is the fact that you can do exactly what you want.

You can holiday where you want, cook what you want, depilate your leg hair when you want (and if that means when your mother claims to be capable of crocheting it, so be it).

Some women can only dream of a world that involves never allowing a Jeremy Clarkson programme into their lives again.

You can decorate the flat to your specifications, secure in the knowledge that your Herculanean efforts on the soft furnishings won’t be greeted with little more than a grunt. You can clean the loo confident that nobody will be along ten seconds later to play lavatorial coconut shy – where every area in a three foot radius wins a prize.

I know Feb 14 is tough, but stay strong, sisters. Go out with your single friends, have a blast – and remember that simply having a boyfriend doesn’t necessarily make for a show-stopping Valentine’s Day anyway.

Just ask my friend who, after flicking hopefully through the Mr&Mrs Smith website one year, received the most lavish and thoughtful gift her boyfriend could conjure up: a crate of Stella.